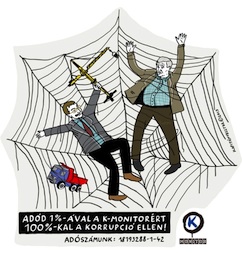 Red Flags: This is how public procurers spend your money

Since its deployment in late 2015, redflags, our online watchdog system has combed through almost 16.000 public procurement documents. The time has come to create the redflag-profiles of those contracting authorities that have spent the most public funds since 2013. Our interactive graphs show how deeply flawed the procurement notices of the National Infrastructure Development Ltd. (NIF) are, or why the spending practices of the Centre for Budapest Transport Ltd. (BKK) and the Hungarian National Asset Management Inc. (MNV) are problematic. Thanks to these fishy procurements, billions of forints have been transferred to winners with questionable backgrounds.

We should note in advance that we have collected quite a lot of information to one place. We encourage you to take a closer look at each profile. Draw the cursor on a given graph and the data you are looking for will become visible.

If you do so, you can see, for example, that

40 ways to get into trouble

K-Monitor, Petabyte and Transparency International Hungary have developed a system that examines potentially corrupt tenders according to more than 40 angles. Thanks to the program, problematic procurements can be filtered out during the bidding procedure, but we also do follow-up checks on procurements without a notice. We have already written about the development of the program here, and have also published some of the most infamous findings here, for example, but this is the first time we analyse the data collected by the system.

This post is about the risk-profiles of the biggest spenders of public funds of the last three years. In other words, we demonstrate who planned to spend how much in certain years and how much they finally did spend officially, keeping an eye on what problems occurred in their procurement procedures that indicate the presence of corruption. We also examined their relations with each other and who the greatest “beneficiaries” of the published procurements were. In every contractor profile we indicated the winners of their tenders of the given year as they appear in the procurement result notices, whether they won alone or as members of a consortium. Even though the sums won by a given member as indicated in the system contain the total sum won by the entire consortium, the dethronement of Közgép, for example, can still be seen clearly, and so can be the appearance of new challengers attempting to board the gravy train.

A peek into the tricks of the NIF 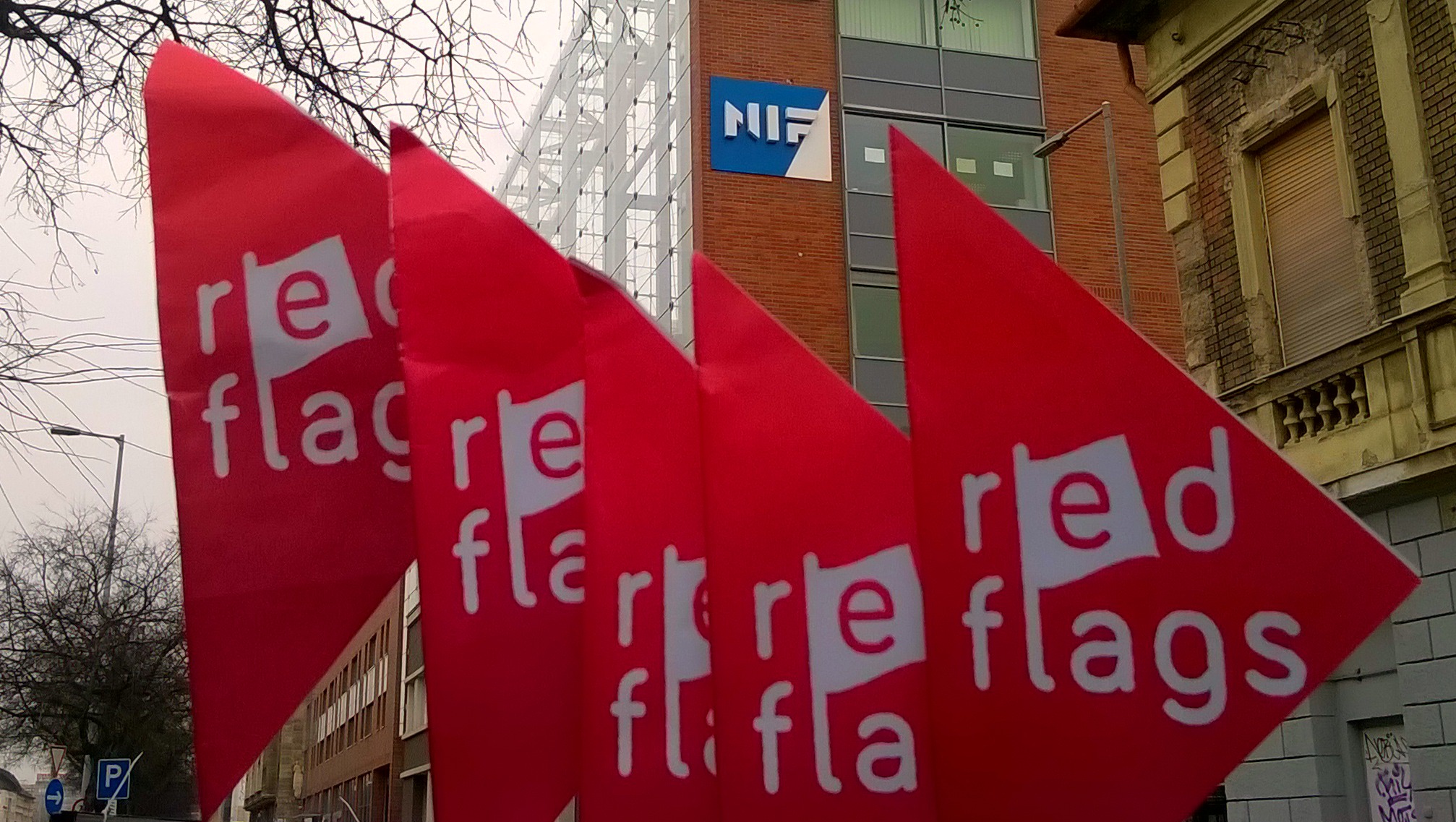 Contracting authorities noted in the profile are ranked on the basis of the amount they spent through public procurements via TED (Tenders Electronic Daily). This implies that the data appearing on the graphs comes only from procurements exceeding the EU threshold, hence published in the official journal of the Union in any of the given years. Total sums are significantly larger but, unfortunately, due to the different requirements of data publication, the system has no access to them. No.1 on the list is NIF with 760 billion forints, but even tailender GYEMSZI spent more than 50 billions of HUF throughout the period reviewed. Contracting authorities distributed these sums through different numbers of tenders and there are major variations regarding the procurements themselves as well, as you can see in the graph below.

As can be seen, during the last three years NIF spent 765 billion forints through 225 tenders, Hungarian Public Road Nonprofit Ltd. spent 150 billion through 156 tenders, while MNV spent 91 billion through 41 tenders. Data of the graphs also tell us how many public procurement documents (procurement notices and result notices) had been issued by each of the contracting authorities during the period in question. It becomes also visible what their relative- and redflag-ratios are.

In the case of the NIF: more than 90 percent of public procurement notices are problematic in at least three aspects

In the case of NIF, 173 of its 225 result notices proved to be problematic, the redflag-average of the risky notices is over 1,5 (meaning that the majority of the problematic procurement result notices has more than one flaws). The risk index of the calls for tenders issued by NIF is even worse. Only 17 of the 259 calls for tenders (these are the notices starting the procurement process) met the requirements of our system, while the redflag-average of the problematic notices is three, which means that on average, every flagged procurement notice contains three kinds of anomalies. By these statistics, the reputation of NIF keeps worsening – it has been already rather far from being spotless.

So what are these anomalies? When taking a closer look at NIF’s profile, it will become visible which indicators appears in how many procurement notices. The system stores this type of data of every contracting authority under the distribution of indicators. Hence, in the cases of calls for tenders and procurement result notices we can get a clearer picture of the factors leading to the highest level of infectivity. Outstanding estimated values in calls for tenders always appear as a risk, and if the field where there was a call for tender is, according to the practice of the Hungarian Competition Authority (GVH), a field suspicious of cartelling, it automatically qualifies the procurement risky. In addition, an overly lengthy professional experience is ordained within the field of technical requirements and restricting geographical requirements are also present. Furthermore, the revenue coming from the subject of the procurement is also higher than the planned value. The planned duration of the contract also raises concerns in many cases. For those who try to soothe themselves by saying that the first two aspects are simply results of the nature of infrastructural development, as it is about a state company building high-value values, it is worth to have a look at the graph under the title “indicator correlations”. This demonstrates which indicators go together the most with certain other ones in the case of a given contracting authority. The darker line presents the higher prevalence of coincidence, while the size of the node shows the procurement-infectionary weight of the indicator. Here you can see that the 5-6- indicators mentioned earlier are in a pretty close relationship with each other. They usually coincide. So when it comes to the building of a road of high value,it mean at the same time excessively strict eligibility requirements. This is quite likely a tailoring practice on the part contracting authority, which, by the way, would like to sign a contract with an alarmingly long duration. 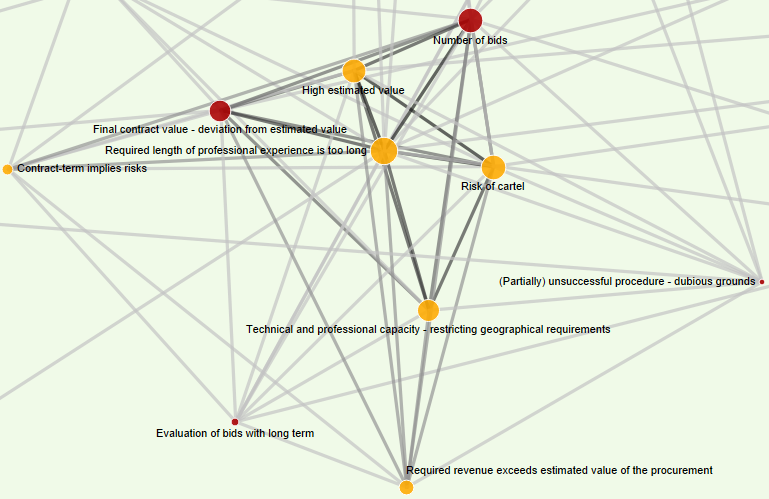 Indicator correlations of the NIF

As a comparison: the correlation-profile of MNV looks entirely different. In their case, it can be seen that all of their tenders too contained very strict criteria regarding the length of professional experience. Regularly there were only 1 or 2 bidders, and the winner could leave with a contract of an extraordinary high value, in many cases different from the initially estimated value. In others words, everyone goes their own way. 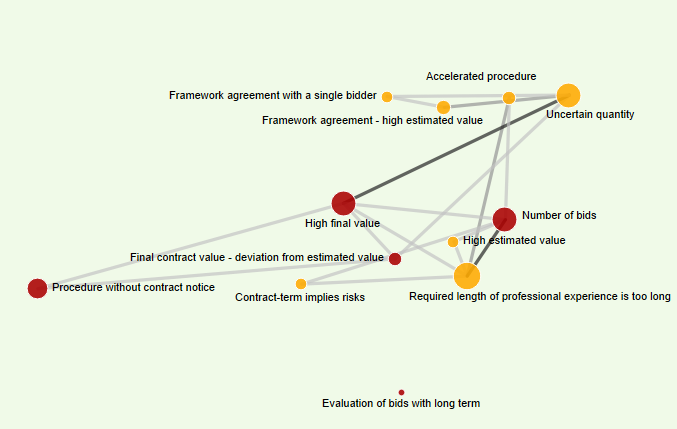 We tell you in advance

These two examples reveal that creative and smart ways of writing public procurement notices have been in practice for a long time. But, finally, redflags system can provide automatized help in discovering these shady practices. Integrating the results of the current analysis we work on the development of a new preliminarily fixed filtering toolkit based on the most common and weighty indicator-correlations. As a result, anybody who signs up by one click can get the list of the latest suspicious procurement notices, (along with their subsequent winners – and with our raised eyebrows). So that finally those whose money is spent by the bodies that come high on the list may also become winners.